Crack Cocaine Use and Abuse Facts 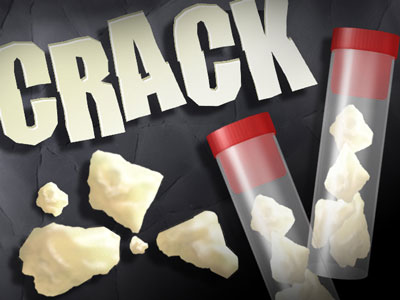 As a plant-derived chemical alkaloid known as benzoylmethylecgonine (methylbenzoylepgonine), cocaine is sold in the streets with several names. Whether it’s called “crack”, “coke,” “C,” “snow,” “blow,” “toot,” “leaf,” “flake,” “freeze,” “happy dust,” “Peruvian lady,” or “white girl”, cocaine is considered as a deadly and highly addictive narcotic substance. Frequent users of cocaine report that they feel as sudden rush of self-confidence and supercharged energy, when they either inject or snort this substance.

They also experience wakefulness, talkativeness, increased heart rate, tremors, heightened blood pressure, dilation of the pupils of eye, rise in body temperature, constriction of blood vessels, and a reduction of appetite. Other responses include a reduction of fatigue (masked by stimulation of the central nervous system), enhanced mental alertness, and increased sociability.

Since there is a high demand for this addictive substance, cocaine sold in the streets is already a mixture of the pure cocaine substance (cocaine hydrochloride) and various adulterants added to increase the quantity, typically for the seller’s profit.

Common adulterants include various sugars (lactose, inositol, and mannitol) and local anesthetics such as lidocaine.

“Crack,” which is very popular in the United States, is a mixture of cocaine, sodium bicarbonate, and ammonia. Since selling cocaine is outlawed, the term “trafficking” is coined because it refers to all activities from coca leaf cultivation to the consumption of crack. In fact, there are a numbers of middlemen involved before cocaine reaches its consumers.

This is one explanation for the skyrocketing amount of value added to the final product, but the key factor is really the illegal nature of the whole trade. Drug trafficking enterprises has the same mechanism as other modern businesses. The difference thrives on the product itself because what they’re selling is considered illegal. Drugs are considered a serious problem because there is a developed market for them in all parts of the world.

When you get addicted to cocaine, it is often very difficult to break the habit. Efforts to cocaine withdrawal would often lead to restlessness, irritability, anxiety, and even sleeplessness. Physical symptoms often worsen as you get preoccupied in your own thoughts; you develop general suspiciousness; and eventually a toxic syndrome, consisting of tremors, agitation, hostility, panic, headache, flushed skin, chest pain, excessive perspiration, vomiting, and abdominal cramps.

If there is no medical intervention, one could experience high fever, convulsions, and heart and blood vessel collapse that may even lead to death. Thus, it cannot be denied that engaging yourself to the use of cocaine is deadly. Treatments for cocaine addiction are costly and there is also difficulty in the attempt to develop alternatives to its usage. Former cocaine abusers should not only be instilled with the skills needed to maintain abstinence, but also with the ability needed to initiate and lead a drug-free life.